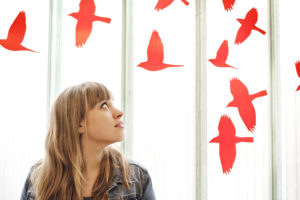 OPENING BAND: LENA DOBLER
The 25th Short Film Week will open on Wednesday evening with ceremonial speeches, entertaining short films and the opening band. Afterwards, the party will go on in the Kinokneipe!
Lena Dobler is an extremely experimental artist who embodies a lot of creativity and depth and who has been creating and treading her own musical paths self-confidently and unswervingly for 14 years now. Equipped only with an electric guitar, she has earned herself a reputation in a solid fan base in recent years with her likeable indie pop. She also made a name for itself internationally. During an internship abroad in Japan, she gave a concert at the Goethe-Institut in Tokyo in October 2012, which was covered by the Japanese television station NHK, and she was a guest at the Japanese radio station J-Wave. So you can find some songs in Japanese in her albums and therefore she will definitely be a highlight during the opening ceremony of the Short Film Week, anticipating our focus on Japan. Further information: www.lena-dobler.de