Five years ago, the Regensburg International Short Film Festival ‘opened’ its architecture window for the first time, which has since established itself and made a name for itself as the only thematic category alongside the region- and country-specific competitions. This is no coincidence, because film and architecture are close in the sense that both incessantly create spaces with the means of art and aesthetics. And again and again there is the question of the role of man in space: does he animate or destroy? Does he use or does he exploit? Does he act of his own free will or is he just a pawn in a system that overwhelms him?   Our foray through the architectural landscape begins in green meadows, where the housing estate exists only as an idea (AM ACKER 12), lets us climb up Berlin prefabricated buildings (BALCONIES), and then takes a futuristic look at Japan’s urban structures (CONTRAPUNCTUS V). We are confronted with questions about living – where, how, under what conditions, and above all, at what price (OWN HOME)? Likewise, we experience the unifying, revitalizing character of infrastructure through the example of road construction in Myanmar (A DAY’S WORK). Last but not least, we let architecture express itself when it resists our behavior in urban space in a brute-humorous way (BENZTOWN).  The Architekturkreis Regensburg e.V., the Ferdinand Schmack jun. GmbH, the Treffpunkt Architektur Niederbayern-Oberpfalz of the Bavarian Chamber of Architects, the BDB, as well as Schnitzer& GmbH jointly donate the architecture award in the amount of 1.500€. In addition to the entries in this program, the films FIREFLIES, HUMAN WALKERS IN MOTION, NANTONG NIGHTS and OSTRICH THEORY from the International Competition, SACRED CLOCKWORKS, MEMORY BERLINER ZIMMER and SUITE from the German Competition and MOVING MONUMENTS and WESTEND from the Bavarian Window are also nominated for the Architecture Award across competitions. The prize is awarded by an expert jury consisting of Waleska Leifeld, Christian Neuburger and Bernd Rohloff. 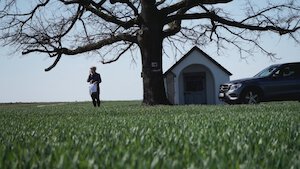 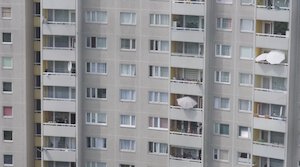 Germany 2021, color, 27 min, OV, Engl. sub
Director: Pedro Martin, Jakob Krese
Production: Pedro Martin, Jakob KreseGropius House in Gropius City, Berlin. The film essay follows the dynamics of seeing and being seen. Laundry is being hung up, two neighbors are talking on the phone over the distance of three floors, and occasionally someone is standing on their balcony, smoking. Yet, most balconies are deserted. The calm pictures, scenes and words add up to what it is: a cosmos of everyday life.Contrapunctus V 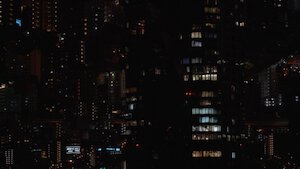 Germany 2021, color, 17 min, OV, Engl. sub
Director: Kenji Ouellet
Production: Kenji OuelletAn experimental documentary featuring Japanese urban architecture. A time capsule of sorts, a multitasking brain (biological and artificial), it makes different themes and voices converge and connect in a structure reminiscent of musical counterpoint. The images show simultaneous events and multi-layered architectural structures. The soundtrack involves multiple voices interacting in a polyphony, each voice associated with one theme: there are quotes about sleep, capitalism and work, Artificial Intelligence, the effect of the internet and related technologies.Rooms
Germany 2021, color, 23 min, OV, Engl. sub
Director: Louis Merki, Welf Reinhart
Production: Louis MerkiThe older couple Monika and Werner lives in an apartment in the Munich suburbs. One day they get a termination due to intended owner occupation. The new landlord, a young mother, wants to move in by herself with her family. But the search for a new home is very hard for the elderly couple. When the bailiff conveys the eviction notice, the couple only got two more weeks to avoid the eviction.A Day’s Work
Germany / Myanmar 2021, color, 13 min, OV, Engl. sub
Director: Max Kerkhoff
Production: Johannes Schmidt, Max KerkhoffA DAY’S WORK offers a glimpse into the harsh realities of manual labor at a moment of relative peace in remote eastern Burma/Myanmar. An observation of progress, in a landscape heavily damaged by man. The work done on this road—which cuts through areas that repeatedly suffered under the cruelty of the military—embodied the hope that has been pushed aside by newly inflicted brutality.BENZTOWN
Germany 2021, color, 4 min, OV, Engl. sub
Director: Gottfried Mentor
Production: Thomas Meyer-hermann, Studio Film BilderA town is driven mad. The city of Stuttgart fights back with heavy action against its traffic chaos. With far reaching consequences. Other cities might follow the signal…