Eight films, eerie and obscure, partly with eye gags, partly in bloody seriousness, accompany you to the witching hour. How to deal with the fact that your loved one just can’t or won’t remember you (IN THE STORM) and what to do when, during a fishing trip, your comrades-in-arms suddenly disappear one by one into the water (DRAINING)? In IMAGO DIABOLUS the title says it all and in THE LIGHT it’s not a good idea to leave the lights on if you want to survive the night. In PHLEGM, snails make life difficult for bankers and MONSTER ENCOUNTERS rarely end well. The encounter of a gas station attendant with a customer in LAST STOP can’t end well either. Last but not least, a young man is allowed to meet the family of his new girlfriend, but the evening is by no means as harmonious as the title SMILES suggests, because their permanently grinning grimaces quickly make him miss his own laughter. 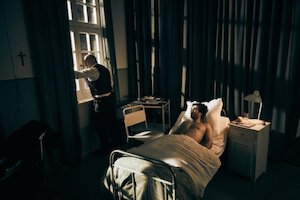 Germany 2021, color, 16 min, OV, Engl. sub
Director: Max Hegewald
Production: Marcus Kreuz, Gabriel Munoz MunozHamburg in the 1920s – while the city is brought to its knees by a storm, a man makes his way purposefully through the streets, driven by his biggest longing – Love.On this night, the search for his big love leads him to a hospital.Overjoyed to have found his man alive, his joy was short lived because the man claimed he didn’t know him. Where does truth begin and longing end? Draining
France 2021, color, 17 min, OV, Engl. sub
Director: Guillaume Chevalier
Production: Claire BonnefoyEight colleagues fish on a mountain lake. Medhi knows that several positions will be eliminated from their fish compagny. Then, one of the fisherman falls into the water… and doesn’t come up again. Then a second one disappears. There’s something underneath that’s trying to get them to the dephts…Imago Diabolus

Germany 2020, color, 8 min, OV, Engl. sub
Director: Abraham Mike Yousaf
Production: Abraham Mike YousafWhile chasing a serial killer, a police officer receives a package with mysterious clues in form of photographs. He follows the clues and makes his way through the city and reaches an abandoned hall where he finds himself facing an unnatural element of his investigation. At the end of this odyssey, the cop doubts and questions his own sanity while time and reality seem to blur…The Light
Spain 2021, color, 12 min, OV, Engl. sub
Director: Iago De Soto
Production: Eye Slice Pictures, Helión Ramalho, Iago De Soto Gudayol, Raúl Cerezo19th century. In a small coastal village, Olalla and her family prepare for the night of “The Truce”. There is only one rule: no lights should stay on tonight. Olalla, unlike her parents, does not believe in superstitions. And she doesn’t think They are coming either…Phlegm
Switzerland 2021, color, 6 min, OV, Engl. sub
Director: Jan-david Bolt
Production: Filippo BonacciOscar’s late. In the surrounding skyscrapers hands are shaken and contracts are signed. That’s the last thing he needs right now. Where do these damned snails come from?Monster Encounters
Germany 2020, color, 1 min, OV, Engl. sub
Director: James Smith
Humans encounter various monsters, but each encounter has consequences. Last Stop

France 2021, color, 9 min, OV, Engl. sub
Director: Pierre Ferriere
Production: Pierre FerriereA customer fills up at an isolated gas station, then douses his car with gasoline and threatens the gas station attendant with a lighter. The customer wants to discuss.Smiles
Spain 2019, color, 13 min, OV, Engl. sub
Director: Javier Chavanel
Production: Alberto DíazBorja has an invitation to dinner to meet his girlfriend’s parents. Being nervous in such situations is normal, but he has no idea what’s coming. The best way to handle the situation: smile and wait. Or not?